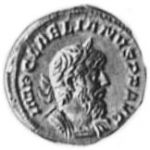 Laureate and cuirassed bust of Laelianus to the right, seen from three quarters ahead. 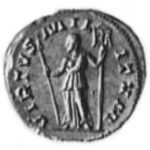 Photo from the catalog quoted below, with kind permission of the Bibliothèque Nationale de France, link to Gallica for download the catalog: https://gallica.bnf.fr/ark:/12148/bpt6k9779259j/f223.item. Same obverse die as AYC #1, RIC 1.

Coin referenced in the RIC and the Cohen. I found the photos of the sale: ''Rollin et Feuardent, 25 avril 1887, Collection de M. le vicomte de Ponton d'Amécourt. Monnaies d'or romaines et byzantines.''. The coin is the lot 474, in excellent condition (described by the catalog as F.D.C, exaggerated grade for a roman coin) and whose ensign is inscribed with XXX. The problem is the following: I notice that the Cohen vol.6, n° 8 describes an aureus VIRTVS AVG with the same character on the reverse, holding a spear and a standard, obverse: IMP C LAELIANVS P F AVG. Source: Ponton d'Amécourt. The Cohen was written in 1886 and the sale of the Amécourt collection took place 1 year later. The Cohen n° 9 quotes a reverse VIRTVS MILITVM, same design, with the standard inscribed with XXX, obverse: IMP LAELIANVS P F AVG, source: Feu M de Coster and M De Witte. Yet it is the coin with the inscribed standard that we find in the sale of Amécourt and with reverse VIRTVS MILITVM, obverse: IMP C LAELIANVS P F AVG. So Cohen n ° 9 (number also assigned by the catalog). No trace of a VIRTVS AVG reverse in the catalog or it was not part of the sale. The RIC 5B, n° 4 lists a coin with the obverse: IMP C LAELIANVS P F AVG, reverse: VIRTVS MILITVM, the emperor standing on the left holding an ensign and a spear. Unlike n° 2 and 3 where the author describes Virtus in a long robe, holding a spear and an ensign ... (I specify here that I write ''standard'' or ''ensign'', wich are the same thing). Is the order of the standard then spear or spear then standard intended, indicating what is seen first from left to right? Or is it a hazard? What is interesting is that the RIC gives as source to this n° 4: BN (Bibliothèque Nationale de France). And we find under catalog no° 547: BN inscribed in blue ink. Catalog belonging to the Bibliothèque Nationale de France. Until the Bibliothèque Nationale de France can recover its collection and inform me about the nature of the copy they own. It seems likely to me that neither Cohen 8, RIC 2 and Cohen 9, RIC 4, exist. A mixture of different descriptions of the same coin is a theory to consider. In addition, do you see XXX inscribed in the standard of the coin sold by the catalog, as noted in the description of the sale? Personally no, but the quality of the photos does not allow us to judge with certainty.