Avitus with or without a beard, discovery and analysis

I start here a particularly difficult subject. Throughout this article, you will read my findings supported by evidence. Only, I can only emit hypotheses, so much the subject is complicated. Nevertheless, new discoveries will be useful to our numismatic and historical knowledge. I will make them live in order.

During my work on Avitus, I analyzed, as always, coins, legends known, compared dies, looking for what could have gone unnoticed. After having looked at more than a hundred of Solidi, I note that all coins shared the two legends noted by the RIC for the Arelates mint:

Link to the sale: https://www.acsearch.info/search.html?id=3108283, link to their website: http://www.arsclassicacoins.com/.

I note a dot between P and RP on the obverse. Wishing to check the real presence of this dot in the legend that was not listed by anyone so far, I look for another copy showing this dot but on a different obverse die. Indeed, at this point, seeing only a coin with this dot, I can not be sure that it is not just a small piece of metal from the die that would have taken off and thus would have printed this dot in relief. On this coin the emperor has no beard, however, two things that I note for the rest: the chin seems to have small "holes" or reliefs that could be a beginning of beard. At that moment, I was just thinking of die wear. The second thing to remember is a line in relief starting from the ear.

Now let's see what's next, looking for this second copy confirming the existence of a dot, I look at this coin: 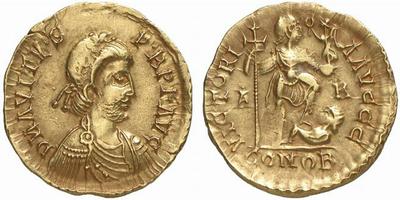 My first observation is this: Bearded Avitus? As for the dot, is this beard due to the wear of the die? Then I look at the first coin with this same legend. And there, very interesting! This is the same obverse die. Consider below where to look first to see that it is the same die: 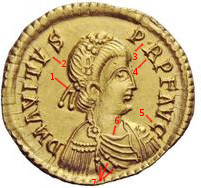 similarities between the two coins:

1: Same horizontal line crossing the end of the diadem.

3: Sapce between P and R, position of the dot.

6: Similar drapery, same number of lines, same shapes and thickness of the top line of the drape.

There are still other points but these are the main ones. So it's the same obverse die. Even thinking of something that could have given this beard as a final result (wear etc. ..) It is clear that it is well localized. But the coin is worn especially on the hair. Thestriking quality is not very good, the letters did not print well. So I can still slightly doubt the existence of this beard, thinking of, certainly a small probability, but still the possibility of an event that caused this visual result. So I continue to search and find this coin:

I want to be clear right now: it's still the same die of obverse! I note that this time, the beard is indisputable. The line that I noted at the beginning of the article, the one below the ear, therefore represents the beard too. The quality of the engraving combined with the state of the die and the striking quality gives a slight effect of visual difference of this beard between the copies. But if I take this third coin and compare it with the first one, whose beard is obviously absent, the cheek is very smooth,  I must conclude that we added the beard on the die and probably well before the end of life of the die. Since it is clear that the 3rd copy is well struck, no die break is to be noted. It seems that the coin that struck this coin was in very good condition.

Bearded Avitus, are there still other coins with a beard? Well yes! And one more indisputable but this time, with a different obverse die and a different legend. The legend is the first one listed earlier in the article: D N AVITVS - PERP F AVG. The only problem with this coin is that there is no photo available on the reverse. Which mint? Probably still Arelates if I look at the style of portrait and letters. The owner of the photo of the obverse of this coin put online, seems to be a serious person and I quote his response to my mail regarding the origin of this coin and its photo copyrights:

"Unfortunately I don't know who is the
copyright-owner of this foto. The foto was given to me by a Mr. W.
Tungsten from former Eastern Germany ca.2002, who deceased without heirs
2011 in Venezuela. Ancient coins were definitely not part of his
properties. On the other side, I have never found a copy of this foto in
the web. Maybe the coin is part of a private collection and was never
sold or published."

So I think it's an official coin and not a modern fake. Even if I do not have information on the reverse, the weight and the diameter, these informations confirms to us that this coin is very probably authentic. If you have any information on this coin, please give it to me.

Back to the most important: by analyzing the three coins, I see that we have three different reverse dies! And this is a big information. Why? Because it's a very convincing indication for my theory here:

Second theory that I raise: Avitus, whose real name was Eparchus Avitus, had close ties with Theodoric I and especially his son Theodoric II. We know that he was involved in his education. It is besides Theodoric who proposes to him to be emperor. From then on, does this beard represent bearded Avitus or Theodoric? (As a kind of allusion) or more likely, did one continue to strike those coins after Avitus's death in 456? This seems to me the most logical. If we imagine a re-use of the obverse die at the end or after the official strike period, it could explain all my findings on: the number of associated reverse dies, the addition of the beard early on the die. 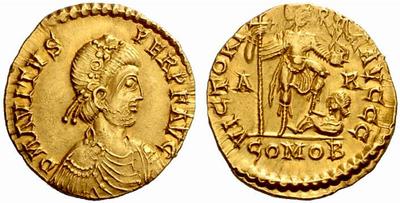 Link to the sale: https://www.acsearch.info/search.html?id=417224, link to their website: http://www.arsclassicacoins.com/.

After a second examination of the Avitus Solidi, it seems to me that most of the coins show a remnant of beard, erased with wear. This photo proves that both variants exist for the legend D N AVITVS - PERP F AVG: with beard, which I class as a strike at the beginning of reign and without a beard that I class as late strike. Here is the coin without a beard:

Link to the sale: https://www.acsearch.info/search.html?id=1103200, link o their website: http://www.arsclassicacoins.com/.

Finally, I note here that I am currently adding all this in the website database. You can find this work online very soon, with all other types classified and studied, as always.