Here is an article showing you how to classify Roman busts. You will be able to follow the analyzes of the clothes and see how sometimes it can be complicated. What adds the biggest part of the difficulty is the quality of representation of the clothes that the coin offers us. I also showed this coin on a forum to compare opinions and I quote in the article, the remarks made by a person who made the same findings as me. I wanted to compare my opinion with that of other people in this subject, because it seems presumptuous to classify this bust definitively. To classify this bust is very subjective. I think we can not reject a mantle on the bust or a simple decorated drapery. It would still be good for ancient numismatics, to look even more precisely on some busts like this one. Because it is not the only one to be discussed and the people who worked on the busts, may not have had these copies to analyze or have not seen the particular points that I emphasize below in the article.

When I looked at a few coins a collector showed me, a coin caught me. A Follis of Constantius II, obverse/ FL IVL CONSTANTIVS NOB C, reverse/ PROVIDEN - TIAE CAESS; mint mark: SMH

. Diameter: 20.00 mm and weight, 3.69 grs. All coins of Constantius II  with this reverse are described with a bust: laureate, draped and cuirassed. Here below, a coin with this bust:

Link to the sale: https://www.acsearch.info/search.html?id=1658175, link to their website: http://romanumismatics.com/

We find this bust on all the coinage of this type. Note, because this point will be important for the future, we have not a large fibula on this coin. The part passing on the right shoulder is simple, to be celar: undecorated. Now, when we look at the coin that interests us and compare it with those whose bust is simply draped and cuirassed, we immediately see two differences. The first is quite easy to see: the part I pointed out above, falling on the right shoulder is here decorated with an undulating line and dots around. This point could have directed us, alone, to an imperial or consular mantle. However I point out that this ornamentation is present on many other coins for other emperors. In my style studies on mints, I noticed that the drapery of SECVRITAS on the reverse of Helena's coins, has the same ornamentation See here the same undulating line with the dots on the drapery falling on the left arm of SECVRITAS: https://www.acsearch.info/search.html?id=2797299. I have also noted that this ornamentation often appears on the coins struck by the mints of Alexandria, Cyzicus and Heraclea to name only them. Here is why I do not want to conclude the presence of a mantle with this simple detail. Especially since I found the same ornamentation on another coin here: https://www.acsearch.info/search.html?id=62011. Except that this ornamentation seems to be on the cuirass of Constantius II. The person who joined the discussion on the forum also speaks of this ornamentation on cuirass of Carus "This piece of clothing with dots and undulated line is quite frequent as part of the cuirass  on cuirassed radiate busts on aureliani (see amongst others Carus from Ticinum) at the end of the IIId century."

Here is a consular mantle on a coin of Maxentius: 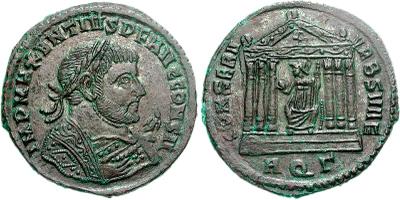 I chose this coin for two reasons: the consular mantle has the undulating line and the dots. But the second element to note and that it also appears on the top of the temple on the reverse. This mint of Aquileia, falls into the category of mints which I noted the presence of this ornamentation on draperies among others. This is why, once again, it is impossible to pronounce with certainty on the clothes worn by the emperor. This is where the second detail comes in, which goes unnoticed: the presence of a large fibula. I also discussed on the forum and the same person had made the same observations as me: this fibula is wide and seems to hold heavy clothes. So, it seems very likely that it is indeed a consular mantle because the fibula is one more point that directs us to heavy clothing and therefore not just a drapery.