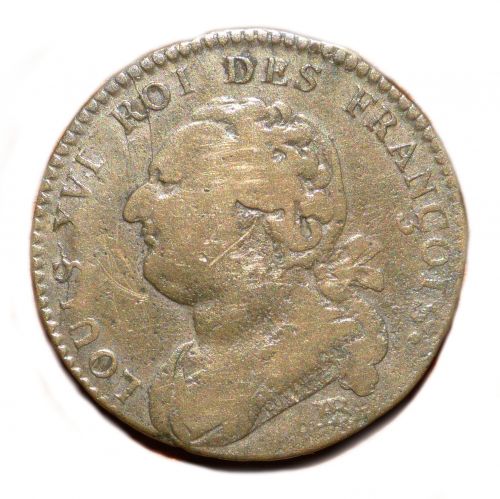 It is a collector friend, Sylvain.D who pointed out to me this variety. A stamp used for number 3 was used to inscribe a cedilla. Year 1791 from the mint of Strasbourg.

We can find many  curiosities on this type of coin. I'm also working on the different combinations of variants that I found on the 12 deniers '' FRANÇOIS '' type. But it was still, until now, unknown. We clearly recognize the 3 of the date, which was affixed to the place of the cedilla. We already knew on the "sols aux balances", an marine ink instead of the T of EGALITE. We find the same kind of thing on this 12 deniers, with another stamp used to replace a letter (here, simply the cedilla). As for this currency that I show you here: https://www.all-your-coins.com/en/blog/antique/decouverte-nummus-caesatvm-nostroruvm-retrograde. We must classify this kind of thing as a variant, but knowing that it is not the will of the engraver or the mint, to differentiate, a series of striking for example. We simply go back to a time saving logic. Already, many of these coins do not even have a cedilla!

We see, the care taken in the engraving of these coins ... When we know, so much in antiquity, we gave special importance to the engraving and minting of coins. Even if there are errors, this is due to rudimentary triking techniques and unintentional errors. Most often caused by a lack of manpower, when it was necessary to quickly strike coins in a region, in order to establish the authority of the emperor. The engraving was sometimes left to the inhabitants of the region, who did not necessarily speak Latin well. The coins of that time represented a kind of newspaper and had to illustrate the greatness of the emperor. Out of the question to produce a deliberately poorly done job. Except during tumultuous periods, where the emperors succeed one another quickly, where the empire recedes and knows a crisis ... and where the usurpers are numerous. And the need to produce coins quickly is far more important than their quality. Especially since their value became more virtual than real. This being due to the lack of metal and also of wealth, the coins lost all their title in silver and in the case of bronzes, their weight. This period can be compared to that of Louis XVI, to a lesser extent. It is also known that after 1795, little attention is paid to these copper coins. The 5 cents and Decimates of DUPRÉ. Struck twice, change of module, use of obverse dies of 5 cents for Decimals. Soft strokes, off-center, overstrike, incuse strikes. We can say that the care provided is much lower than that of the Romans, even in their worst periods of crisis (if we exclude the barbarian strikes, recognized official at a certain period, as we needed coins). At the time of Louis XVI already, the coin was there to provide a service and not to illustrate a greatness of France.