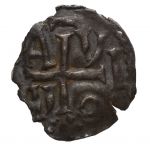 Photo of the copy preserved at the Bibliothèque Nationale de France (public domain), link to the page of their website showing the photo of the coin: https://gallica.bnf.fr/ark:/12148/btv1b104136028.r=charlemagne%20denier?rk=1459234;4. It is most likely the copy illustrated in the old works (similar shape of blank, cracks in the same places).

On an illustration from these works, there are three globules on the obverse, under the letter L ... but this must be the beading which is represented, the rest of the beading must have been off the blank. We see, on the copy of the Bibliothèque Nationale de France, that they are probably defects and not globules, however, the illustration showing these globules displays a similar form of blank. This same illustration showing a globule in front of the letter R and only two globules in the middle, which is not the case on the copy of the Bibliothèque Nationale de France. Uncertainty on the number and the arrangement of the globules on the reverse.


Seems never to have gone on sale.