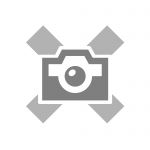 R (the letter R between two crosses, three globules above the right cross, one globule below the letter R).