Another problem often encountered: spaces between words or in the middle of the same word. Example:

Source of the two coins: http://www.arsclassicacoins.com/

The first coin, if you write correctly the legends, with their cuts (something that is often forgotten, we note also that Numismatica Ars Classica, correctly note the legends). We obtain: VICTO - RIA – AVGG. It is often used to write VICTORIA AVGG and I explain why the cut (also called "break") is or is not written down in this article.

For the second coin we get: VICTO - RIA GOTTHICA. In this case, the cut is clear and unmistakable. But! Where I chose a new system, it is in the writing of the break: I put the dash 6 ( - ) and not alt + 0150 ( – ) as all those who think to include a cut do. Why? Because I differ a legend break for the same word and a break between two different words. But why bother to do it? For several reasons, some people who read this article, a book or a sales description, have no knowledge in Latin, or do not know the common abbreviations for titles, for example. M COMM ANT P FEL AVG BRIT here, to be clear I separated each word by a space, but between us, do you think that a beginner would have understood by himself that COMM and ANT are two different words? COM MANT? COMMAN T? This is probably going to be a problem when he reads a coin. For us, this choice of break writing allows a more pleasant reading, especially for the long legends of a kind: T IMP AVG F COS – II CAESAR DOMITIAN AVG COS COS DESIG II / S - C. If only one space becomes finds between a word and a Roman numeral (so noted alt + 0150 (-)) one can end up with two or more spaces, depending if one or more elements of the drawing cross the legend or the engraver has chosen to space for a another reason. Fictitious example T IMP AVG F COS – II CAE - SAR DOMITI - AN AVG COS DESIG II / S - C. This legend is fictional but shows how my system can simplify reading. In any case, if we want to be precise, it is better to differentiate a space between two words and a space in the same word. Small precision, but you understood it, when two words are close but without a big space between them two, i use a simple space (bar of space) as when we write normally.

For the vast majority of descriptions, if an element of the scenery enters into the legend, it is not noted as a cut. All this is subjective. But I agree with this position. However, while 90% of the authors do not notice any breaks in the case of an element of the drawing in the legend, I chose to note some exceptions. Let's look at Aureus of Valerian I above. The author had noted VICTORIA AVGG, so without any space. For my part, I noted VICT - ORIA – AVGG. Because we see a larger space between the T and O of VICTORIA, than between all the other letters and the crown, even if it does not enter directly into the legend, seems to cause this space. And that the palm crosses between the A of VICTORIA and the A of AVGG.

Why still, arrive at such a degree of precision? Because, in my opinion, this is useful for several reasons: to note every thing is always used, even the most little detail. For example, in the context of a die comparison *, one coin can be immediately discarded because a cut is not present on the other coin. But this is not the most important: we sometimes have two coins of the same type with exactly the same legend, but the spaces are not the same. Hazard? Sometimes yes, sometimes no. It may be possible that the engraver has deliberately differentiated two legends to mark two distinct strikes. It happens that an issue of (for example) denarii in a certain quantity and that some time, later, he striking of those denarii restart. New dies are created if the old dies are too worn out. Why not imagine that the engravers would have chosen a small difference between these two "series"? They was artists, why would not they sign their different works in this way? Let's leave the conjectures and enter into a known reality: yes, the strikes are controlled and differentiated. The marks in the field, mints marks  to exergue or elsewhere are used to differentiate these series, officinas etc ... for better control of emissions. It is reasonable to imagine that these cuts are important. Even if in a large majority it is just the desire of the engraver, without any logical reason, other cases are important. Making a complete and accurate inventory is never useless and it takes very little time.

* die links: in ancient times coins were engraved by hand, ''dies'' were created, which were then used to print in relief the coin (or more precisely virgin blanks which, once printed, become a coin). So two dies were needed to print a coin. One of obverse and one of reverse. Finding the same die of obverse or reverse on two coins sharing a different obverse or reverse is very important in numismatic research and can be used to date strikes.

Here we enter in a particularly delicate subject. To note a legend with points is difficult for the simple reason that two cases can pose problems:

- Wear or die blocked *: it happens that we meet a legend with points whose existence leaves no doubt. But sometimes there are some missing in the legend. Wear? blocked die? Why have  noted a point between TR P and IMP but not between IMP and COS? The small points are so much more likely to disappear.

- Default of blank or deposit: sometimes we see dots appear on a coin, it can be a defect of blank, a small blister or a deposit. With money in hand, we can easily dismiss these two cases, but on photo it becomes more difficult.

- The damaged dies or better known as the broken dies. (If you have arrived here you already know what a die is, otherwise see above the note "* die Link" just above this chapter). The case of the wear die is different from "Wear or die blocked" mentioned above. This time we talk about the wear of the die. Repeated shocks can cause the detachment of a piece of metal from the die, so it will cause a raised impression. I chose to use the term "damaged die" because the broken dies most often give a raised line on the coin or a broad and unsymmetrical shape, rather than a point. A blank defect, can damage the die that strikes him too.

Here is how I exclude the presence of points with a photo or with the coin in hand, first: the form. By magnifying the coin with a software or a magnifying glass we can see irregularities of the point clearly indicating that this point has not been engraved. Secondly, if there is only one point on the coin, this is doubtful, it is probably one of the cases mentioned above. but you must still look closely at its form, it may be that only one point has been engraved or that the others have disappeared. Cases where points appear in the legend with totally different positions, at the top of a letter, then at the bottom etc ... and also the presence of other small points in the field of the coin (attention to the mint marks in the field or the exergue that may include points) also make these points doubtful. It is still important to analyze these points carefully because coins with real points positioned differently exist. Finally, last doubtful case, the points appearing and cutting words illogically in the legend, without any space between the points and letters.

I exclude doubtful cases and note in this case the legends without point. If we can not exclude or affirm the presence of points but that their presence is still probable, I note the legend without point but with a note mentioning these points below. A simple way to confirm the presence of points is to compare with other coins of the same type but with different dies. If I also find these points, it is certain that they should be noted because they are part of the engraving.


* Blocked die: when after a hit, a piece of metal comes off and remains stuck in the die, in a hollow part. This event causes the disappearance of a letter, a dot or an element of the drawing since the hollow part supposed to print it is blocked.

As explained at the beginning of the article, note the words present in an element of the drawing, as for the type BEATA TRANQUILITAS or BEATA TRANQLITAS presenting a legend around the altar and words inscribed in the altar such as VOT IS XX and FB in the field is often long and imprecise. 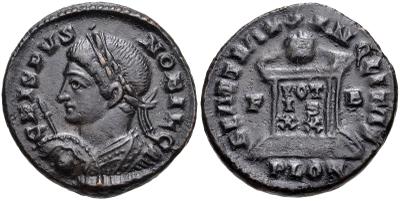 Source of the coin: https://www.cngcoins.com/

I propose, to simplify the writing, to note the elements in the field with slash ( / ) before, as well as the words inscribed in the altar with parentheses. Here is the legend as I have defined: BEATA – TRANQLITAS (VOT _ IS _ XX) / F – B. The dash of 8 ( _ ) is used to mark the position of a word in the bottom of a coin, in the exergue. When one word is written below another, in an element of the drawing, I also use the dash of 8 ( _ ). This way of writing is faster, easier and more accurate.

Complete codification of the legends

How to read coded legends:

A "legend" is the numismatic term for words written on a coin. Very often inscribed in a circle near the edges of the coin.

- Large dash or alt + 0150 ( 0 ) denotes a space between two different words or word and a Roman numeral. Example: IMP and VETRANIO as well as COS and II will become IMP - VETRANIO or COS - II.

- Slash ( / ) means a word in the field of coin. The numismatic field designates the central part. A word that is written vertically, not along the coin but in the center. Example: / S - C.

- Dash 8 or underscore ( _ ) means a word in the bottom of the coin, below the drawing, usually below the line of the ground. Example _ VENUS. Attention: the marks of workshops are not noted. How to differentiate a shop mark and a legend? A legend is a word or a beginning of a word. A mintmark consists of letters and symbols: SIS for example.

- ( ) word in parentheses means that it is written in an element of the drawing, for example: in a shield.

- (VIC _ AVG) means that the words VIC and AVG are inscribed in two lines and AVG is below VIC, both inscribed in a design element.