Find complete articles on the latest discoveries and useful tutorials to start or deepen your knowledge of numismatics.

Here is a small article talking about a variant that I just discovered for two different emperors. We will analyze the type of reverse and the classification given by the RIC on this type. 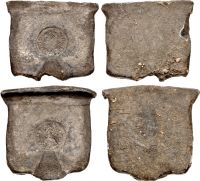 After the long article talking about astronomy on ancient coins, i continue with this one, shorter but obviously interesting. No many things are said about the molds created by the ancient forgers. However, they allow us to learn about the technics used, but also, as you will see, on the extent of the circulation of coins at this period. 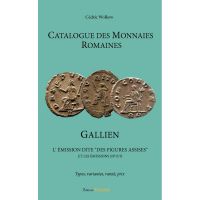 Today, I'm going to talk about the works made by Cédric Wolkow and I advise you to read as soon as possible!

A few days ago, I had noticed an unpublished bust for Balbinus in an article and I was saying that maybe somewhere it's already referenced. Since it, Curtis Caly told me that he already noted this bust some years ago on a forum.This also applies to this variant that I think is not referenced so far. If you have a reference, do not hesitate to let me know. As for curtis Clay, ill edit the article and quote the first discoverer, if someone already listed this variant below on the article.

In a few days, my work on Balbinus' coins should appear on the website. If you read this article later after its release, you will be able to see this work. In the meantime, I have just listed a new bust (obviously, it may be that someone, somewhere has already listed ... in any case this is not known to the general public). EDIT: Curtis Clay informed me that in 2013, he had listed this bust, link to the topic: https://www.forumancientcoins.com/board/index.php?topic=93213.0. But he had not yet seen this bust with the type PM TR P COS II PP that I present here.

Commodus, new dating on the aureii Published on 15 septembre 2019

During other research, I noticed a small detail: an obverse die link between coins, the first of which is not dated precisely. I do not know if this link has already been noted somewhere and if I am the first discoverer.

In this article we will see how to differentiate an official coin with a legend error of a contemporary imitation. We will also see how to classify this coin that will be used for analysis.

This article will be very short. It's just about presenting what I discovered. You can read more about an article I made a few months ago, about the same type of variant on a coin of Licinius I. Link to this article: https://www.all-your-coins.com/en/blog/antique/romaines/licinius-i-decouverte-nouvelle-variante-du-ric-825. 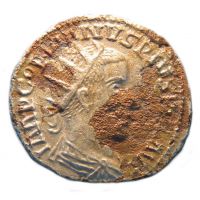 An unlisted bust for Hadrian Published on 03 février 2019

It was while browsing the coins of Hadrian that I came across this bust. And that I discovered that he was not referenced.

New! An unlisted and particular Sestertius of Antoninus Pius Published on 30 janvier 2019

We know the attributes of each Roman allegory, yet sometimes we see some visuals showing us what we call "variants". This is the case here with this coin. Once again, it was a friend who showed me this coin. He thought he had a perfectly normal Antoninus Pius Sestertius. I remember immediately seeing that something was strange. In the second he showed me this coin, I thinked that Annona seemed to have a lot of things in her hands. 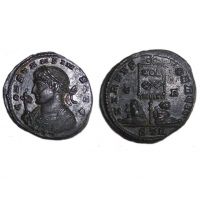 A Roman coin must always be analyzed in its entirety. When I look at a coin, I pay attention to the letters, the legend breaks, the drawing and its details. I am looking for an error, a variant or something special. These are often unnoticed items because they are well hidden or are not things that are usually important to watch. The coin I am going to present to you comes in this configuration.

It's by browsing a detection forum: http://www.detecteur.net/forum/viewtopic.php?f=10&t=124494.And reading the post on a Licinius I coin, I see a picture put by a member, illustrating the type of coin found by the person wanting identification. Surprise! I see immediately a detail gone unnoticed so far: it is not the usual scepter held by the emperor, but a spear!

Discovery of variants on the Aureii and Denarii of Septimius Severus, RIC 288 Published on 27 juillet 2018

While browsing the coins of Septimius Severus type RESTITVTOR VRBIS, I noticed a variant of scepter / spear. The RIC gives us for this type of coin, a single description: Rome holding a spear. But, we may wonder, since the tip of this spear always shows us balls, if we always have a spear and not a scepter in front of us. Some coins (such as the one illustrating the javelin crosswise below), show us a spear or a scepter, whose end placed on the ground is masked by the shield. But no characteristic point of a spear goes out on the side of the shield on the right. Except if we follow the drawing, the spear is glued to the shield and so we should see this point. All coins showing a glued spear or behind the shield show no tip. sold by Roma Numismatic Limited, link to the sale: https://www.acsearch.info/search.html?id=1896304, link to the website: http://romanumismatics.com/. 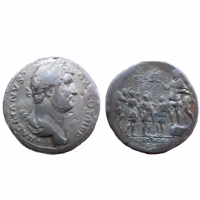 Here is a small article presenting a currency that had not been seen for a very long time. A sesterce of Hadrian:: 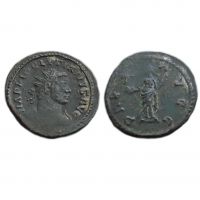 When we talk about scarcity, we must always specify several things. Indeed, an antique coin can be rare one day and much less in the future. Why? Because one can find a treasure of 2000 coins during a search and see a large number appear. But how do we know if we have a real rarity in front of us? The coin illustrating the article has been posted to http://www.numismatique.com/forum/ on the subject "Aurélianus de Dioclétien (RIC 67 var)", link to the topic: http://www.numismatique.com/forum/topic/26180-aur%C3%A9lianus-de-diocl%C3%A9tien-ric-67-var/. 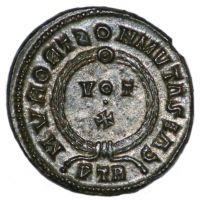 Here is an ancient curiosity. A Cripus nummus with a retrograde legend on the reverse. But that's not all. This coin was present in the collection of a friend and it is by looking at its coins, that I pointed out these originalities. I will detail you here, all that makes this coin, a particularity.

How to identify roman coins Published on 24 mai 2018

Before starting, I remind you that you have the tool "image search engine" https://www.all-your-coins.com/en/search-by-picture/romaines-167/" for already identify the emperor and the type of reverse. The associated legends for each emperor and each type. Full details about ho to use it, here: https://www.all-your-coins.com/en/blog/antique/comment-utiliser-le-moteur-de-recherche-par-image. All illustrated coins are with copyright photo permission of : Numismatica Ars Classica. Link to their website: http://www.arsclassicacoins.com/. Except for those with mention.

This article explains how to identify your coins, even if you have no knowledge of numismatics.

How the old database works Published on 01 février 2018

This is not an article, but rather, some details on the functioning of the database of ancient coins.

You will find for each type of coiny listed, a photo of the bust and a photo of the reverse type. If I have not yet done a study of style, these two photos will be a representation of the style that we find most often. If I did a style study like here: https://www.all-your-coins.com/en/emperors/romaines/vetranion, these two photos will also be an illustration of the most common style. Below you have a style board. It does not include the photos just above, which are considered part of the board, but I have not posted a second time in the board. Each picture of the board, declines an evolution of the most current style, therefore the picture of the bust and the type of reverse. So you have, for example, a picture of the bust that is a thin and skinny portrait of the emperor and the last picture of the board that shows an emperor with a large, fat face . All other photos between them are an evolution from skinny to fat.

In cases, where, there is no style board, while at the top of the page concerning the emperor (example with Vetranio) the mention "study of style available" is noted in red and bold; this simply means that the coin is very rare and therefore style varieties do not exist or are very little different. If some fields, such as weight or diameter, are not filled, the explanation is simply that there is no knowledge about this information. Example with the coins known to only one copy, the sale of which does not inform the weight or the diameter. Some weights can be displayed with extreme precision, for example: 4.03 grams. Either the coin is known to one copy and therefore the displayed weight is that of the coin, or it is an average weight. I note the theoretical weights in the notes below, which does not preclude averaging. Indeed, if we simply stick to the theoretical weight, you will regularly find coins weighing more and even more, quite regularly. It is therefore preferable to give an average indication. Low or high, so-called, extreme weights, sometimes almost double the usual weight in the cases of the most heavy weights, are noted in the comments and are not taken into account in the average.

It is in the year 2015, by browsing the coins sold for Vetranio at Classical Numismatic Group: https://www.cngcoins.com/ , that I discovered this coin sold 190 $ in July 2015 and described as being a normal coin of Vetranio (link of the sale at the end of the article).

I wrote a small article, in the same year 2015, about this discovery and a review of descriptions "laureate" and "diademed" for the coins of Vetranio that I put here, online today. This discovery is also described in this page (Maiorina category, light weight series): https://www.all-your-coins.com/emperors/romaines/vetranion. Since then I have searched for a second coin sharing this particularity and it is http://www.geminiauction.com/ which signals us a second coin sold on April 6, 2017, link of the sale: http://https: //www.acsearch .info / search.html? id = 3734612 and describing this portrait error. Currently I do not know if Gemini is aware of the coin sold at CNG.

at the exergue. However, there is something important: these two coins do not share the same reverse die. The position of the COR letters of CONCORDIA are not aligned in the same way with the letter A in the field, so the position of the hands and the length of the cloak and the decoration of the bottom and top of the standards change. It would be particularly interesting to discover a coin with the same portrait but having been struck by another officina or a different mint mark. If you are reading this and are not a specialist in antique numismatics, you will wonder why such a discovery would be important? Simply because it allows us to know better the functioning of a mint and precisely of this mint of Siscia during the period of Vetranio and Constantius II. Each die is engraved by hand, it is therefore "unique". So it's a puzzle game that is played. Sharing a die, for the same type but with two differents officinas or better, between two different types is important. That's why, if you see a coin sharing one of the three dies described in this article, you can share it here: https://www.all-your-coins.com/contact.php , if you want to make an anonymous report I will respect your wishes. I also note that I am currently creating a special page for this huge puzzle of obverse and reverse corners, by type and by emperor. Feel free to share your dies here too.

Explanations on the particularities of the portrait and revision of the descriptions "laureate" and diademed "for Vetranio:

This bust is identified by the author as that of Constantius II, due to several points: