New variant of RIC 14 for Balbinus

A few days ago, I had noticed an unpublished bust for Balbinus in an article and I was saying that maybe somewhere it's already referenced. Since it, Curtis Caly told me that he already noted this bust some years ago on a forum.This also applies to this variant that I think is not referenced so far. If you have a reference, do not hesitate to let me know. As for curtis Clay, ill edit the article and quote the first discoverer, if someone already listed this variant below on the article.

In any case, it is not noted, neither in the RIC, nor in the Cohen. Before considering this possible variant, I want to make a comment to you: in my opinion, the character on the left of the platform is a soldier and not a citizen, as noted by the RIC. The Cohen also notes a soldier on the left. I must be more specific: I think that at least in the majority of cases it is a soldier. Because as we will see in the variant that I will soon present to you, this kind of detail can change.

Let's see the exact type that we meet each time:

Photo of a coin sold by Classical Numismatik Group, link to the sale and their website: https://www.cngcoins.com/Coin.aspx?CoinID=154098.

We see four characters on the platform. We can not know who the character is. It seems logical to see a citizen since this scene represents a liberality.. Then on the platform, from left to right we have: Liberalitas holding an abacus and a cornucopia, Pupienus, Balbinus and Gordian III sitting with behind them a soldier standing, holding a spear.

And here, below, the coin showing a variant of this reverse: 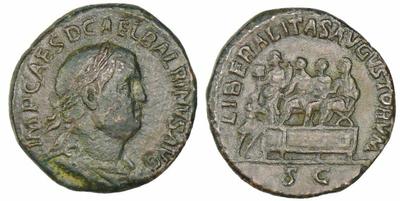 Photo of a coin sold by Monnaies d'Antan, link to the sale: https://www.acsearch.info/search.html?id=796492, link to their website: http://www.monnaiesdantan.com/. Coin probably tooled, but it's the only copy with photo available. The other coin that I saw, with the same reverse, is 100% authentic. But the coin is wery worn and do not permit to totaly exclude the presence of the character.

The character on the right is here in military clothes and the soldier on the right of the emperors has disappeared. I have for the moment seen two coins with this variant of reverse. Finally, we cannot know if other variants exist. Because there is some coins that no one has seen and referenced precisely and which are quoted in Cohen, volume 4, page 116: ''Sur l'exemplaire du cabinet des médailles, le bas de l'estrade n'est pas orné; mais dans le catalogue d'Ennery on lit: << il est à remarquer qu'au devant du tribunal ou estrade, sont deux bas-reliefs, dont l'un représente, à droite, Rome assise, donnant un globe à Balbin suivi de Pupien; tous deux debout en toge. L'autre fait voir Balbin et Pupien sous le même extérieur, recevant l'hommage du préfet du prétoire, suivi de deux autres militaires >> ''. Traduction: ''On the copy of the cabinet of medals, the bottom of the platform is not adorned; but in Ennery's catalog we read: "It is to be noted that in front of the court or platform are two bas-reliefs, one of which represents, on the right, sitting Roma, giving a globe to Balbinus followed by Pupienus; both standing in toga. The other shows Balbinus and Pupienus under the same exterior, receiving the tribute of the prefect of the courtroom, followed by two other soldiers >>.