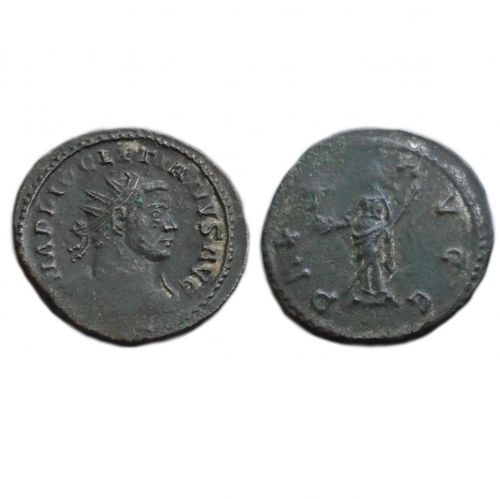 When we talk about scarcity, we must always specify several things. Indeed, an antique coin can be rare one day and much less in the future. Why? Because one can find a treasure of 2000 coins during a search and see a large number appear. But how do we know if we have a real rarity in front of us? The coin illustrating the article has been posted to http://www.numismatique.com/forum/ on the subject "Aurélianus de Dioclétien (RIC 67 var)", link to the topic: http://www.numismatique.com/forum/topic/26180-aur%C3%A9lianus-de-diocl%C3%A9tien-ric-67-var/.

We can deduce that a coin is rare because it is minted to few copies. To determine this, we look at its provenance, its mint. A mint has striking periods and with the knowledge that we have, we can know the periods of activity of a mint. A short striking period necessarily involves a small amount of struck coins. But again, a particular reverse hinting at a particular event may involve the same small mintage. A legend containing the titles of an emperor may also indicate the length of the period in which his titles were current. Giving information on coins minted with these titles. We also add the marks (which issue etc ...) and the dies links.

But without having any of this information, what element could show us that a coin is rare or even very rare? Without relying on the frequency of appearance of money, which, as I said at the beginning of the article, can become much more common in the case of discoveries. This is where the coin that I show you in this article becomes interesting.

This coin is a variant of the RIC 67, the RIC 67 giving us the legend IMP DIOCLETIANVS AVG associated with the reverse PAX AVGG. Var is therefore said to be a variant because the bust on the obverse of this coin is radiate and cuirassed on the left, with a globe, a spear and a shield. What is not the case on this coin showing a bust radiated, draped and cuirassed on the right. Moreover the reverse is also a variant because there is no mark in the exergue. This coin comes from the Lyon mint. The variant we see here is called "extremely rare". If we doubt that it is extremely rare, it seems certain that this coin is at least "very rare" and will always remain so. Because what proves it to us is that the coin shares the same dies of obverse and reverse as another coin put up for sale in 2000 See the link to the sale here: https://www.acsearch.info/search.html?id=74436. Link to the Numismatik Lanz München website: https://www.lanz.com/.

Given what is known about the life of a die and the number of coins that this die could strike before breaking; we deduce that if we find on two "scarce" coins, the same dies of obverse and reverse, this type of money is rare. If a consistent strike had occurred, we would have a high probability of seeing known copies, with different dies. I do not have information on the dies of the other known copies, which according to my knowledge are two or three in number. But it would not be surprising if the dies are the same. CGB informs us that the coin sold here, which happens to be the same coin sold by Numismatik Lanz München, shares the "Same reverse die as the copy of the BnF Medal Cabinet" (link to their website:https://www.cgbfr.com/, link to the sale: https://www.acsearch.info/search.html?id=55625). So we still see how rare this type is.