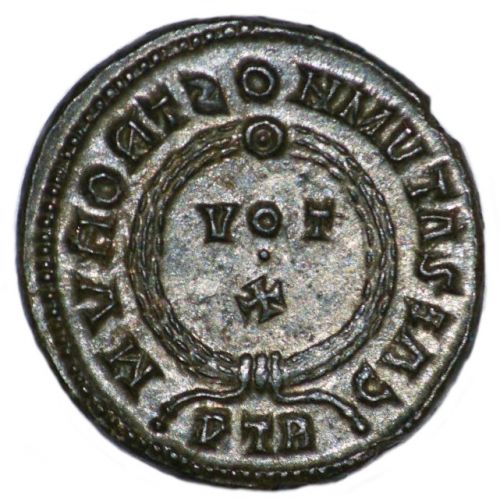 Here is an ancient curiosity. A Cripus nummus with a retrograde legend on the reverse. But that's not all. This coin was present in the collection of a friend and it is by looking at its coins, that I pointed out these originalities. I will detail you here, all that makes this coin, a particularity.

The obverse legend is quite normal: F L IVL CRIS - PVS NOB C.This coin as you can see below, is with an official style. It's not an imitation. Even the diameter and the weight indicate its authenticity of time: 3.16 grams for 18mm. It is always good to show coins to other connoisseurs or experts, to confirm an unmistakable official style. This coin was presented, among others, to the international expert Curtis CLAY. Who, like me, confirms that this coin is not an imitation. If each specialist agrees to say the same thing, there is no doubt. Imitations are sometimes very well made and with a style very close to the official style. I've seen two, sold as official (I note here that by "official", I mean "from an official workshop") which were actually imitations of very good quality. These imitations also had a retrograde legend, but the style of the lettering and the portrait showed that it was imitative coins. Below, the picture of the obverse (1) and the picture of the reverse (2) 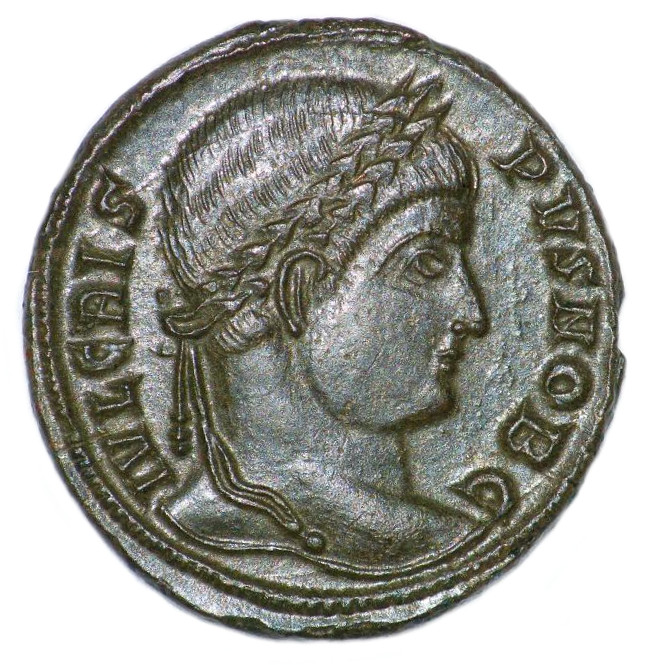 Here, this oin has a retrograde legend on the reverse, these retrograde legends are known on coins of this type. I also have this coin sold by http://cgb.fr in 2012, for the mint in Arles with a retrograde legend to show you. Link to the sale: https://www.cgbfr.com/crispus-centenionalis-ou-nummus-fdc,brm_276895,a.html. As you can see, this legend is entirely retrograde, but this coin is an imitation. Which is not the case on the coin of the article which it, comes from the mint of Trier. Look carefully, first at this CAESA, starting from the right and going up. Then look at the second S after the O at 12 o'clock. The first S is not retrograde, but the second is retrograde. The N always near the O, is not retrograde either. What else? The normal legend is CAESARVM NOSTRORUM. Here we read CAESATVM. The R has therefore become a T. Moreover VOT _ X is engraved normally, and not retrograde, just like the mintmark PTR in exergue.

So we have three particularities, this coin has two S letter which are not in the same direction and a non-retrograde N, the legend is retrograde and a fault in the word CAESARVM which becomes CAESATVM. What to conclude from all this? We probably left the engraving of the legend of the reverse to a beginner engraver. An illiterate engraver? And maybe, you'll smile, in drunkenness state. Why not. CASATVM does not mean anything, so it is not a voluntary variant, entering into a certain logic. I therefore classify this coin as a variant, because it constitutes a variant of the original type. But keep in mind that this is an engraving error and not a desire to differentiate one strike series (also called issue) from another.