Here is a little article highlighting one thing I noticed. Many books or auction houses almost always describe certain reverse characters as being Spes or Victoria for example. If we look at the overall imagery as well as the legends, we cannot refute these descriptions. However, in my opinion it would be more judicious to speak of the mixture made between the image of the allegory and that of the Empress.

Sometimes some people rightly describe the reverse character as the Empress. This is often the case, for example, for the types SPES REIPVBLICAE or SALVS REIPVBLICAE both showing a figure standing in front, veiled and holding two children in her arms. It is obvious that the empress is indeed represented on these reverse because it is she who gives birth to the future emperor. The reverse scene representing the maternal side. I took the thought further by analyzing the smallest details. Let's look at this coin: 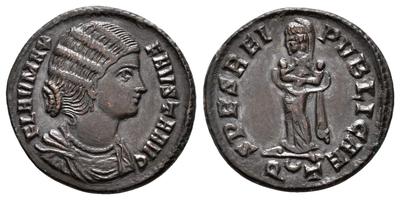 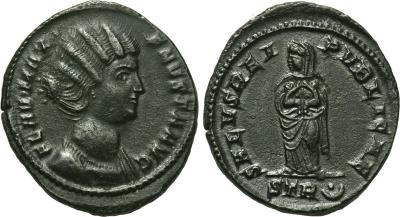 Two mints very far apart geographically but showing the same detail. In addition, it should be noted that the two reverses refer to Spes and then to Salvs. So it is not a question of showing an allegory corresponding to the legend but of engraved legends according to the desired message. The allegory of the maternal empress is unchanged.

I will now show you another type of reverse that no one (to my knowledge) has yet noticed the Empress imagery on. This reverse is as an example, indeed I noticed this mixture of imagery on other reverses and for other empresses (also for emperors but I will not speak about it here). Let's look at this Solidus of Empress Honoria:

The reverse is noted everywhere as being a Victory or an angel. It is rather an angel because the image of the victory at that time had become that of an angel symbolizing the Christian victory. If we take a closer look we see that the angel wears a pearl-diadem similar to that worn by Honoria, moreover the clothes are decorated like those of the Empress. I add that earlier, we find for example Julia Mamaea on a medallion in which the bust of this empress is represented winged. See the medallion A/ IVLIA MAMEA AVGVSTA, R/ FELICITAS PERPETVA.

In this article, we saw how tiny details can reveal important things, but above all we see how much attention to detail the engravers have.