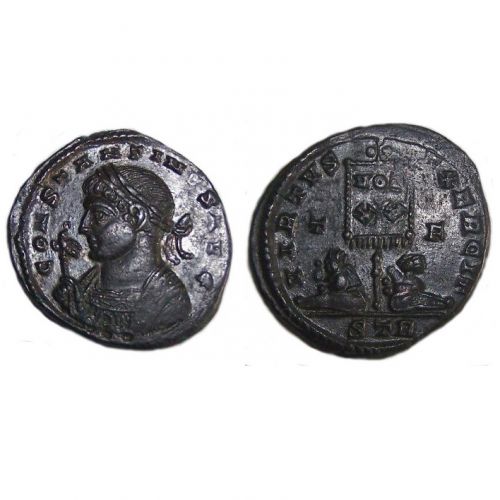 A scipio hold by Constantine I with little particularity

A Roman coin must always be analyzed in its entirety. When I look at a coin, I pay attention to the letters, the legend breaks, the drawing and its details. I am looking for an error, a variant or something special. These are often unnoticed items because they are well hidden or are not things that are usually important to watch. The coin I am going to present to you comes in this configuration.

It is a nummus of Constantine I with the reverse VIRTVS – EXERCIT. The bust of Constantine I is laureate, he wears the imperial mantle and holds a scipio with his right hand. The scipio is a scepter surmounted by an eagle. This bust is known and so far, this obverse is like all others of this type. This bust is also described in the RIC volume VII: buste K 3 ("laureate..., wearing trabea, eagle tipped sceptre in right hand'' RIC VII page 88, tabulated key of obverse bust). He is known with the reverse VIRTVS EXERCIT showing a standard. And the associated legend is CONSTANTINVS AVG, known with several cuts. Note that the bust is turned to the left as mentioned in RIC VII. This type struck in Trier, has known two officinas, the first: P and the second S. The coin that is the subject of the article is the RIC 291, noted as with the mark S which corresponds to our mintmark STR.

This coin is rare, noted R4 / R5 in the RIC VII. We also see that its frequency of appearance is very low. The type with a trophy instead of the standard is already rare, but the one with the standard is even rarer. One might think that finding a variant on this coin would be unlikely. Here, in my opinion, it will not be a variant, just an added detail. However, I will note this coin in the database as a variant. While specifying in the comments, that this detail is a fantasy of the engraver. Again, as I have already said elsewhere, the classification of changes or of small details appearing or disappearing is subjective. On my side I always note these details. They may be important in the future and are already important as part of a study of the dies.

But what is this detail that I have seen and spoken of from the beginning without having described it? Have you watched the coin several times while reading the article? I wished, by describing the coin and quoting its description in the RIC, to make you return several times on the picture of this coin. Have you seen? The eagle on the end of the scetre here holds a crown. Here is a close-up of this detail:

Normally, given the title of the article, you have already had to look at this scipio several times. But without having any indication, would you have noticed this detail? When I saw that coin that a collector was showing, I noticed this detail at second glance. His owner had not noted this detail and we must admit that he is discreet. The RIC did not mention that the eagle is holding a crown. Probably because he did not notice it or more probably because the coins analyzed were like all the others, therefore without the small crown. I had already noticed that this crown seemed to appear on this bust (turned left or right) associated with other types. But his engraving was fine and not complete. Simply an arc that we could have interpreted as a wing of the eagle. This coin is the first I see with a crown for this type and comes, by its quality of engraving and its very good state of preservation, confirm the existence of the crown held by the eagle.

What to say about the presence of the crown? First of all, that we have in front of us a fantasy of the engraver. Then we can think of the reverses showing IOVI with an eagle at his feet holding a crown. Or think of an allusion to victory. The reverse showing two captives corresponds to this idea of victory.

To conclude, I note that this variant of crown exists elsewhere. This coin proves it. Now I ask you the question: if you have this coin in your collection, with the crown. If you then find another coin with another type of reverse but the same bust and the missing crown while you know that other coins include this crown for this type ... What would you do? Would you like to buy the variant you are missing? Probably. So I think that noting this little detail is finally interesting for many reasons.