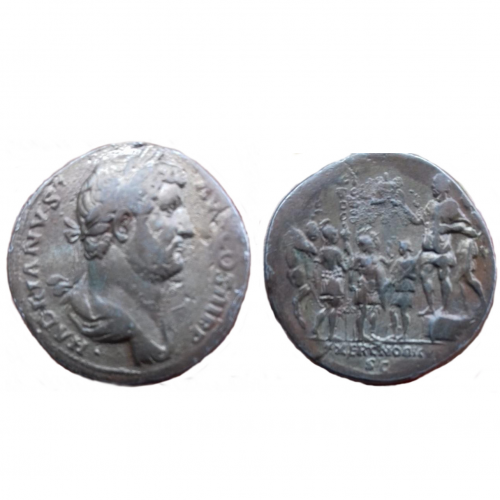 Here is a small article presenting a currency that had not been seen for a very long time. A sesterce of Hadrian::

Hadrian dressed with a toga, standing to the left on a pedestal on the right, with the prefect and addressing to four soldiers and officers. The first soldier holds a shield, the second a standard, the third holds signs, the fourth a standard and a horse by his bridle. An officer on the right, just below Harien, faces the soldiers and holds a sword. Coin posted on http://www.numismatique.com/forum/ in the topic "Sesterce d'Hadrien", link to the topic: http://www.numismatique.com/forum/topic/26191-sesterce-dhadrien/?tab=comments#comment-131237.

To familiarize yourself with the coding of legends, see here: https://www.all-your-coins.com/en/blog/antique/nouvelle-codification-des-legendes . This article agrees with the comments made here: https://www.all-your-coins.com/en/blog/antique/diocletien-ric-67-var and discusses the rarity of an ancient coin according to the number of different known coins.

Here, this coin, just like the Antoninian quoted above, shares the same dies of obverse and reverse with this coin: https://ikmk.smb.museum/object?lang=en&id=18204319&view=rs. It is therefore a coin of great rarity because there are few different diess. How many different obverse or reverse dies? I do not have access to this information, but when a collector finds the same type of coin and has the same dies ... it proves the few copies struck. We also note the small dots before and after the obverse legend: HADRIANVS, above: AVG etc ... which suggest a use of the die until it is unusable. Because these points are to be excluded from the category of points used to cut the legend. By dint of hitting, the die, shocks after shocks, loses small pieces of metal and thus prints these holes in relief on the coins it strikes. But the question is: was this die created to strike this type EXERC NORICVS? Or did we use a de that had already been used to strike another type?

To clarify this point, it is advisable to look for a connection of obverse die with another coin. A coin struck before this Sestertius. This will lead to the conclusion that the EXERC NORICVS type did not have an entire strike with these dies, but only in part. Indeed, we can, with our knowledge and having reproduced the striking techniques of the time, have a fairly accurate idea of the number of coins struck by a die before it breaks. If a die of obverse has already struck another type, the production number of the preceding type can be further reduced. Similarly, if a copy struck with another previous type has die break starts in the same places as on both EXERC NORICVS Sestertii, this would mean that worn dies were used to strike those coins with EXERC NORICVS type, from the beginning of the production. ! This further reduces the production figure considerably.

To conclude, we must first see how many different dies are known and if, for example, only two dies of obverse are known, the second die also has these same proofs of reuse for this type? Let's look for die links first, before we start getting closer to a conclusion. Because if we already see that a single cdie of obverse is used a second time, we can imagine that this type probably did was not struck a lot. During large amounts of striking, we create new dies, but we can not exclude all the same reuse in addition to a creation of new dies. However, the mere fact that we do not find different dies in the finds of these coins, seems to indicate a weak strike anyway.