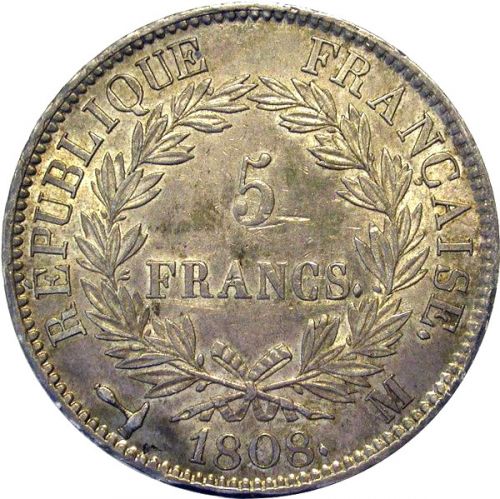 At first, I thought of a blocked die. But then, I searched and found all the variants listed later in the article. They are variants and not blocked dies. The study of Arnaud BRUNEL, published in the numismatic bulletin n ° 90 page 7 http://www.bulletin-numismatique.fr/bn/ancienbn.html shows that TIOLIER, on the 40 gold francs an XI, has already created these missing olive variants. Why? It remains a mystery.

My study has several advantages, allowing to see better. Indeed, here, unlike the 40 francs, we have several mints to analyze and several modules. What can be deduced? Only one thing: it seems that these variants are only present on one year, the second year of the type. As on the 40 francs (first year for these coins). The year 1807 being struck with a small mintage, one can think that in the spirit of TIOLIER, these coins are like essays. The year 1807 is struck with a die containing all the olives, so like the type 1 (which I voluntarily classified as  n° 1 because of the fact that it is the same as in the year before and that's the one we meet most often). Let's move on something that disturbs me: it almost always remains (the wear of a coin can leave a doubt) and even always if one excludes worn out coins, a remnant of the tail of the missing olive. That's what, at first glance, had pointed me to a blocked die. Why an engraver, would put a beginning of tail but without the olive that goes with? Why not simply engrave the leaf without olive? I think the matrix have been retouched. The olives were removed. How many original matrix were there? I think at least two for the 5 francs. Because if we created these absences of olives, the number of combinations (5) can not have been created on a single matrix. If these olives were erased on the dies, this results from a meticulous work leaving no trace on the dies (streaks, lines). We can also discard the modification of the dies that would leave streaks. It would be ridiculous to analyze the olive tails to see if some are longer than others in the same places. Both the quality of striking, die wear or even slight clogging, can affect these small items. What also removes the modification of the dies, it is that one engraved the mark of mint on these. Given that their position moves for several coins of the same type (the type with this or that olive missing or present) it shows that we are in the presence of several different dies but with the same variant. If I take as an example, Bayonne's mint with type 4 (5 francs with olives inside and outside between U and B, without inner olive between Q and E and with short leaf) I see that the flower in the bottom left (mint mark) is either near the leaf to his right and almost glued to it, or far away. And this is present for each mint. The mint marks moves. Moreover, since these variants are found in several mints, it is more likely that the matrix have undergone a change rather than the dies. Type 2 and Type 5 only exist for the same mint. Why?

Incidentally, I am still working on the tally and discoveries of new variants that I will update regularly here. For the moment, it still lacks a work provided on the 2 francs and QUART DE FRANC which must logically also include these variants. Here is the score I've done to date. Before looking at it, I must tell you that "only" 203 coins were classified for the 5 francs. As you know, finding this type of coin is "easy" because few collectors are looking for these coins. In reality, there are not many coins of this type. There are still a lot, but if everyone tried to have them, the quotations would be very higher. Research is also limited to one year. Finally, the last problem is that, if the coin is too worn, I can not conclude with certainty if there is absence of the olive. This tally is therefore very serious and contains only coins leaving no doubt. So understand that of these 200 coins, in reality, about 1000 have been analyzed. And what adds difficulty is to check, if, every coin found on the internet is the same as another sold elsewhere. So I had to compare the scratches and shocks, to determine if the coins sold are the same. Lighting can change everything and trust the color of a patina is not smart. So I compared 200 coins, one by one ... I let you imagine the extent of the work. If I take into account the coins leaving a doubt because worn. We arrive at the same ratios. The tally below shows us the rarity of the types. If you have any coins to show to participate in the tally, you can send them to me here: https://www.all-your-coins.com/en/contact. Before seeing the score, let's look at the picture below, to understand where the interesting points are: 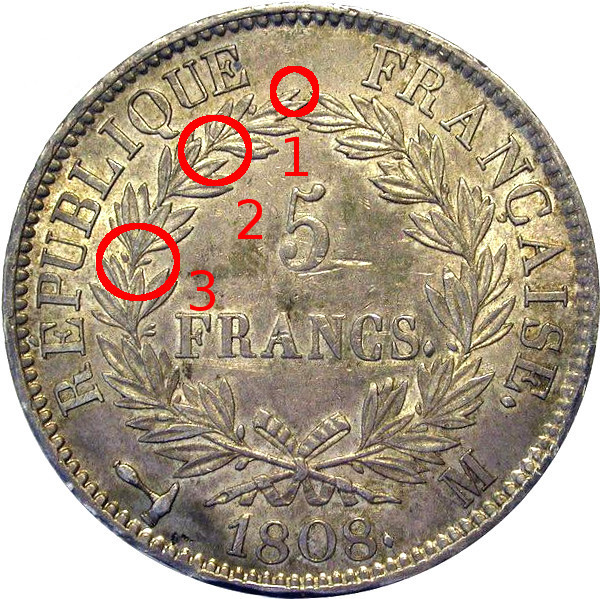 1 = Short or long leaf. Here, the leaf is long, to locate, the tip of the short leaf does not exceed the high leaf to his right. Often, his tip is even below the leaf on his right.

2 = Inner olive, present or missing between Q and E of REPUBLIC. Here she is missing.

3 = Internal and outer olives between the U and B of REPUBLIC. Here, both are present. The inner olives are those on the right, those on the left are called "outer". It is a landmark relative to the center of the coin.

(type 1) 5 francs with inner and outer olives between U and B, inner olive between Q and E and normal leaf:

(type 2) 5 francs with inner and outer olives between U and B, inner olive between Q and E and short leaf:

(type 3) 5 francs with inner and outer olives between U and B, without inner olive between Q and E, with normal leaf:

(type 4) 5 francs with inner and outer olives between U and B, without inner olive between Q and E with short leaf:

= 1 coin very worn, presumed existence but to be verified.

(type 1) DEMI franc with inner olive between Q and E