Find complete articles on the latest discoveries and useful tutorials to start or deepen your knowledge of numismatics.

It is a glaring variant but that a lot of people hadn't seen but that a lot of people hadn't seen. This variant is submitted by Sylvain D. Indeed he noticed that on the tests of 1833, the F in the field in the middle is small or large. I noticed in my turn, that the die with the large F always displays a point after the date, which is not the case with the die with the small F. In addition, the date seems slightly larger when the F is tall. The reverses are exactly the same.

Here is today a new coin that I present to you and which still comes from the collection of Mr. Sylvain D. The coin that we will discover is a 10 cents of the year 1900, type Dupuis. Let's analyze together this coin and the research path before reaching a conclusion. 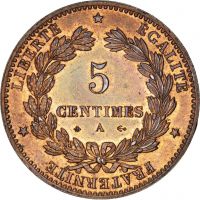 There are in all 3 sizes of letters for the mint of Paris (letter A): small, normal and high. However, it is possible that one names small by: very small; normal will also be named medium. This is due to the fact that the punches used to mark the mint letter on the die, are more or less small. For example it will be very small if the letter is engraved with a punch used for cents, on a corner for a 2 francs. The final visual will give the impression of having a ''very small'' letter. I also think that name is given to help people understand what we are talking about. Because people who referenced these variants knew well that it is very difficult to see the difference between normal and small. Because sometimes even the punch '' normal '' is already itself small. One way to say '' imagine a tiny letter ''. 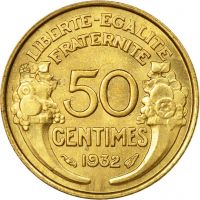 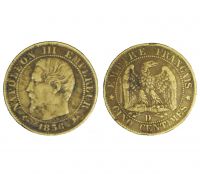 Another curiosity that my friend Sylvain.D presented to me. A five-cent Napoleon III for the year 1856, minted in Lyon and in brass.

The color is yellow and there is no doubt, it is brass. After analysis, I think this coin is official. Everything fits, including the reverse die which shows us a right star a little crushed down, common to all the coins of 1856. There is, for me, no element who permit to doubt about the l authenticity of this coin. The diameter is the same as an official coin and the weight is 4.95 grs, therefore quite good, since the coin is worn and the theoretical weight is 5 grams for a bronze coin. The difference in mass between brass and bronze is tiny. Of course, everything also depends on the dosage in the mixture of metals. Finally, I note that the edge is smooth, as for current coins.

The Gadoury, 1989 edition, page 90, tells us that a essai of 5 cents in brass for the same year 1856 is already listed. But it is a coin marked ESSAI instead of CINQ CENTIMES and ZINC CUIVRE NICKEL instead EMPIRE FRANÇAIS. On the reverse, no difference except that the two mint marks are anchors. The indicated weight, is 4.70 grs. But, we have here a coin having exactly the type adopted on current coins. And as I pointed out, with the same obverse die as the current bronze coins! It seems to me, therefore, at this point in the investigation, that this coin is not a essai because nothing indicates it, except the change of metal and it does not appear to my knowledge, any essai to the adopted type of brass in the registers. A brass blank was probably introduced when minting coins for circulation. In any case, we know that this blank was present in the Lyon mint. This might perhaps teach us more about the origin and location of these brass coin. 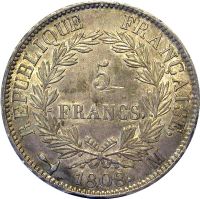 Quotes are found everywhere, but they are all criticized for the same thing: they are too high! All connoisseurs will tell you and talk about it often. So much so that almost all sellers make their own prices!